Secretary Duncan’s speech today before the National Press Club was predictable almost to the point of being a cliché. One thing you can say about him is he is consistent to the point of never saying anything new. Some even argue that his revelation of the Race to the Top finalists was so predictable that their announcement was anti-climatic. Duncan’s speech today was right on his usual message: 1) Charter schools are the way to go, 2) Teachers need to be evaluated and rewarded using test scores, 3) Every child deserves an effective teacher in his or her classroom, and 4) Close down low performing schools. Hardly anyone would disagree with his statement that every child deserves an effective teacher, but we do disagree with him about how to get there.

About the only unique thing he said today was something about the Obama administration’s “modest” role in this quiet revolution. That is an almost laughable statement. There is nothing modest about what this administration has done in the name of education reform. They have shoved their reform ideas down the throats of every single state. Never mind there is absolutely no research basis for any of this reform agenda. Many have said it: the US Department of Education is guilty of dangling money in front of states who, due to economic conditions, are almost insolvent. These states will do anything to get their hands on that money, even adopting reform measures pushed by Secretary Duncan and his Department of Education. I would hardly describe that as a modest role in what he is calling a “Quiet Revolution.” It’s more akin to pulling the trigger or setting off the dynamite charge.

At any rate, Secretary Duncan’s offer of billions has caused a “sudden, radical change” but that change has occurred not because everyone really believes the agenda he is pushing will work. Those changes have happened because they were bought. Change purchased with money is absent conviction, and Secretary Duncan and the Obama administration have failed miserably in getting educators to believe their version of change. President Obama’s campaign slogan, “Change We Can Believe In” sounds so hollow now that our Great American Education System is still being “Duncanized.”  Instead of pretending that all is well and using his podium to make inane speeches, Secretary Duncan needs to get the education establishment to believe in his version of change, not those just chasing him around, hoping some dimes and nickels fall from his pockets.

In the spirit of Secretary Duncan’s speech, I could not help but share this campaign video that includes the song a not so subtle reminder of that campaign slogan, “Change We Can Believe In.” 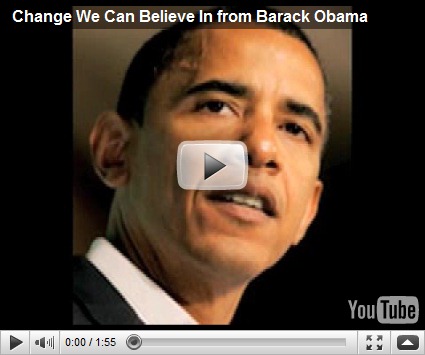