Need an Inexpensive Outliner App for Your iPad or iPhone? Try Cloud Outliner

As a former English teacher, I have often believed in the power of outlining as a means to organize thoughts for a project and a presentation, and now, as an administrator there are still many times I use the strategy to organize thoughts or ideas for a school-wide project. Obviously, users could use just about any word-processing app to create outlines, but with the advent of mobile devices, being able to create an outline easily on my iPad or iPhone is a must, and word-processing apps are just a bit too complicated for this activity.

There are, of course, many outliner apps available for mobile device users, but some are as costly as $29.99 and others, while free or less expensive, do not offer all the features one would want in an iOS app. Recently, I downloaded and tried an outliner app called Cloud Outliner, and it has proven to be an inexpensive solution for creating outlines on iOS mobile devices. It basically offers users these advantages:

Creating outlines as an educator and school leader is still an excellent tried and true way to organize school projects and ideas. Cloud Outliner offers users looking for an economical choice an iOS outlining application that is simple to use. For more information, check out "Cloud Outliner in the iTunes Store."
Posted by John Robinson Ed.D at 10:52 AM No comments:

Google Hangouts for iOS: Make Phone Calls from Your iPad and More!

Google Hangouts for iOS is another must-have app for those who rely heavily on Google Hangouts to connect with others. The app allows for the usual video connecting and messaging as well. One of its more interesting features is that you can make free voice calls in the US and Canada, right from your iPad. I used the Google Hangouts app  for a vodcast and it worked as well as my desktop. I also used the app to make a phone call and that too worked beautifully. Google Hangouts is available in both an iOS version and Android. Check out Google Hangouts in the iTunes store. (Google Hangouts) 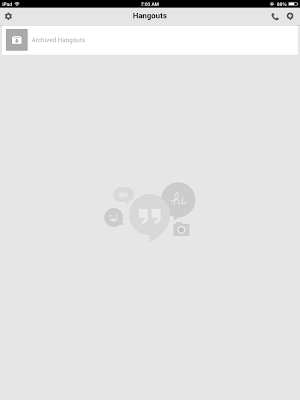 Google Hangouts for iOS
Posted by John Robinson Ed.D at 7:02 AM No comments:

25 Ideas for Using Evernote as an Educator and More!

Evernote is one of the most powerful apps available. I've been a heavy Evernote user all the way back to 2010. It is absolutely one of the first applications I open on my desktop every single day. It's power is greatly enhanced because it gives users access across many devices and the web. Its Trunk and Extension apps extend that versatility even further. Tomorrow afternoon, I have the pleasure of sharing my Evernote experiences with Phi Delta Kappa in Raleigh, North Carolina. My goal is to show them how Evernote's versatility can streamline their jobs as educators. Here's my presentation for that session. I hope many of you find something useful in Evernote.

“A new study reminds us that poverty is the giant backpack dragging down American students.” Jordan Weissmann, “Study: Almost Half of Public School Students Are Now Low-Income,”

Start talking about the poverty of American students and  you’re quickly accused of making excuses for a bad education system, or of pushing a political agenda. Truth is, poverty is real, and if speaking out against is political, then so be it! Those who haven’t experienced it or who don’t see it everyday, can easily dismiss it and comfort themselves that poverty is lifestyle choice. "Those who are poor are poor because of the decisions they've made. They deserve it," is the thinking of many politicians. That statement is political too, and I would say a bit of out of touch with reality. Poverty isn't a lifestyle choice; it is a direct result of a society that has chosen to put undying faith in an economic system based on competition, and at the end of any competition, there’s going to be winners and there’s going to be losers. Those in poverty are the losers. In the American system, those who are winning have re-written the rules to make easier for them to win. Under those conditions, I am not surprised that almost half of our public school students now classified as low-income.

As Weissmann points out in her article, “Your success in school depends largely on what your parents earn.” Those who try to erase that reality by focusing intently on the “Great Teacher Argument” as the way out of poverty are entirely dismissing poverty's effects on achievement. Sure, there are stories and anecdotes of students overcoming poverty and difficult life circumstances to become “successful” in terms of financial and economic security. But these “Horatio Alger stories” are hardly scientific evidence. Like Alger’s propaganda-like “rags-to-riches” stories peddled during the Gilded-Age,” many today have once again bought into that thinking, and they’re the ones trying to drive a reform agenda based on ideals that didn't work during the Gilded Age and will not work now. Getting out of poverty takes determination and perseverance but it also takes getting some breaks along the way too, and today, too often those breaks are in the hands of those who have wealth.

There were some other interesting data in Weismann’s article too, such as the two maps showing the long-term trends of students qualifying for free and reduced lunches. The first map (Check them out in the article here.) shows clearly where regionally the number of students qualifying for free and reduced lunches has grown. Bet you can guess where those states are? The South. In the South and the Far West, the numbers of students identified as poor by free and reduced lunch qualification has increased to 50% and beyond in most of those states. Clearly, all is not well economically with everyone. The "rags-to-riches" fairy tale is increasingly being proved wrong.

In the article, Weissmann points to 3 takeaways from this data:
Perhaps it’s true that the poor will always be with us. And, it can be sometimes used as an excuse for low expectations for some students. But the reality is, it exists and it does have effects that sometimes not even the most heroic teacher and principal can overcome.

The problem now is not only that poverty exists. The problem is that many education reformers dismiss it. It is often seen by educators as a subject “too political to talk about.” But part of me can’t help but wonder if that’s not what those who are enjoying this unprecedented wealth want us to believe. It is in their interest that we believe the Horatio Alger stories from the Gilded Age. As long as we believe that poverty is no excuse for being successful, then we’re not going to do anything to fix an economic and political system that is engineered to benefit the wealthy, sometimes at the expense of the not-so wealthy.

As an educator who is both passionate about public schools and the education of students, I for one, will not dismiss poverty as an obstacle students can climb over and beyond. I will continue to speak out against our American political and economic system that now mirrors that of the Gilded Age more than ever, and that gives those with means all of the breaks.
Posted by John Robinson Ed.D at 1:23 PM No comments: