Accountability systems whether in education, business, or government are based on mistrust; a mistrust that those who are its subjects are unable to or unwilling to carry out the jobs they have been assigned. Theodore Porter, author of the book, Trust in Numbers: The Pursuit of Objectivity in Science and Public Life, writes:

"Perhaps most crucially, reliance on numbers and quantitative manipulation minimizes the need for intimate knowledge and personal trust."

It stands to reason that when education systems, (or any governmental or business system) come to rely on accountability systems, trust is shifted from the “intimate knowledge" of individuals and their capabilities to systems of numbers and statistics that are declared by the hierarchy in the system as being both more trustworthy and representative of truth. In order words, when there’s an intense distrust that those who occupy production positions in the system, systems of accountability and audit are established in order to force the system to do what it’s designed to do. In education systems, “learning” is the object of production, so naturally accountability systems are designed to force the system, made up of administrators, teachers and students’ to “produce learning.” However, “learning” is an object of contention in the first place, with few people agreeing on what it is.

Even with the disagreement on what learning is and what learning is worthwhile, there is more contention with how to measure “learning" it in a way that accurately captures it. Accountability systems look to tests for this task. Tests are developed, one after another in a fruitless effort to measure this idea of “learning” which is actually an exercise in trying to grab water. Just when educational measurement thinks it has “grasped the learning” that it thinks is significant; it escapes through their fingers. That’s while since the dawn of the accountability era, there have been wave after wave of “new standards and new tests,” all in an effort to try to capture the elusive quarry, “learning.

But I have a novel idea, at least novel in the face of accountability and testing; if teachers are professionals, then what if we were to transform teaching back into a profession where practitioners exercise “professional judgment” to determine whether learning takes place and that the system “trust their judgment"? Teachers could once again be educated to teach and use their judgment to decide whether learning has happened, and be trusted, rather than subjected them and to the mistrust of an accountability and auditing system that fails to capture the nature of “learning” in the first place. This endless pursuit of new standards and new tests that have costs millions and billions of educational funding could be shifted to fostering more effective professional teachers and a teacher professionalization system, that avoids trying to mimic and ill-suited medico-professionalization system, to create its own, never-before-realized profession.

At its heart, we are deforming our education system with both accountability and auditing methods that inadequately define “learning” and by default, are incapable of capturing “effective teaching." The mistrust of the professional educator and “trust in numbers and quantitative manipulation” doesn’t fit the task of teaching. It’s perhaps time to stop trying to make education into the image of either business or medicine, and invent a whole new profession that remembers that teaching and learning are much too complex to reduce to numbers anyway.

Do PISA Scores Really Mean Anything? Not Much!

Do PISA (Program for International Student Assessment) scores really matter? One would think so, because every time the latest round of scores are revealed, there’s a barage of “Sputnik-like” declarations of educational doom and gloom within the United States, all reminscent of when the Soviets launched the first satelite into orbit. Just like it did then, each time these scores come out, the declarations of“educational third world country” status is declared anew. The United States’ future economically is seen a bleak, and tales of woe begin. But there are some really good questions to ask about PISA.
If the United States suddenly vaults into first place in the PISA rankings will our country suddenly experience full employment and economic prosperity for all?

Will American businesses suddenly find all those “mythical-but-can’t-find-qualified workers?

Do PISA rankings by country really mean anything?

I would say “No” to all these questions. The United States’ “weak” rankings in PISA scores tell us absolutely nothing helpful nor does it indicate all the gloom and doom that policymakers public policy wonks like Arne Duncan have claimed in recent years.

Having a number one ranking in PISA scores is not a ticket to the economic promise land. Nor does it mean that we should take up the short-sighted view that our education system’s purpose—from kindergarter to higher education— is to feed the “human capital” machine for corporations. Sure, we want out students to be employable, but making sure they score high on an international test won’t do that. That’s short-sighted thinking. Education should never be about preparing students for the factory sitting down the street; it should be about preparing students so that they can learn and adapt for jobs their entire lives. It is simply short-sighted to see education as worker-training program. We need to train our students to be able to learn for a lifetime, be creative, be critical thinkers, and adapt to whatever comes their way. The jobs down the street will probably move to another country in a few years any way.

Using PISA data, or any standardized test data such as SAT as a scare-tactic and propaganda tool is a moral problem. Those who do that, are like the barkers selling a special elixir guaranteed to fix what ails. They should have the same credibility as snake oil salesmen. It is simply policymakers pushing their own brand of reform with the cry of “wolf.” Sure, our schools can always improve. We can teach our students more effectively. But, this clarion call of doom and gloom every time a round of PISAscores or any standardized test scores needs to met with skepticism if not just ignored. 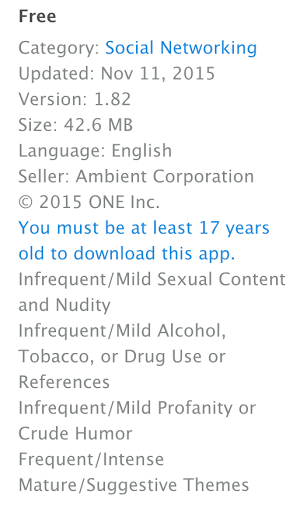 I don’t usually rate apps with thumbs up or thumbs down, but this one gets double thumbs down because it is a potential cyberdisaster at every school.