4 Benefits of iPad Use for Administrators and Educators

I recently received a message from an administrator colleague who wanted to know how I use the iPad as an administrator. He was thinking about purchasing the device and was struggling with whether it would be a wise use of his money. I have been using the device for about four months now, and it is another tool in my educational device arsenal. The other tools include my two laptops and my Android phone. With these devices, I have been able to make technology fit more seamlessly into what I do as an administrator. I am continuing to explore ways to use the iPad in my role as an administrator. I will say at this point: It is not a replacement for a laptop and don’t think that is the intention of its manufacturer. So if administrators are thinking about purchasing iPads to replace laptops or desktop computers, I think they will miss the iPad’s true potential.

In an earlier blog post, I indicated that the iPad has provided me as an administrator with three main benefits. Those benefits continue to be true. With another two months of experimentation, I would now add a fourth benefit.

The iPad is now part of what I do on a daily basis. I carry it with me into meetings, when I’m walking around the building, and when I sitting in waiting rooms. While I would not necessarily advocate school systems spending money for blanket purchases of iPads for their administrators, especially in tight budget times, it can be a useful device for the school administrator. Getting one can be a wise investment.

My Previous Posts on iPads and Related Apps

3 Reasons an Administrator Needs an iPad

Ideas for Helping Administrators and All Educators Move to Being Paperless

5 Ways Administrators Can Use Evernote

For almost 2 years, I have been using Chrome as my default browser. I enjoy its simplicity, its speed, and most of all the extensions that are available for it. Recently, Eric Sheninger posted “Chrome Extensions for Educators” on his blog, and he provides an excellent list of must have extensions that educators would find useful. He included my all time favorite in that list, The Diigo Extension. I have several Chrome Extensions installed, but this one is one that I use all day long every day.  It basically does four things that enhances a user’s ability to make use of all the information found on the web.
Highlighter Tool
The highlighter tool does the same thing to web pages that a conventional highlighter does to a printed page, with one major difference. When sentences of passages are highlighted with the Diigo Extension tool, these same items are then made available in a user’s “My Library” of his or her Diigo account. As an administrator who reads hundreds of web articles and posts in a given day, I use this tool frequently to capture an idea or passage that I plan to either examine more closely or use at a later time.  It is an easy way to capture text while reading online. 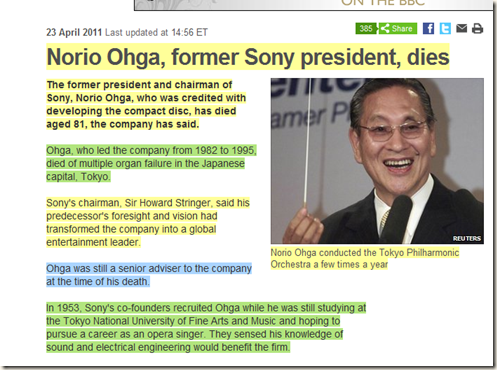 Chrome Diigo Extension Highlighter Allows Use of Colors
Bookmark Tool
The Diigo Chrome Extension Bookmark tool allows users to bookmark a page with the click of the button. As you can see below, it gives users a dialogue box which allows them to either share the bookmark or keep it private. They can write a brief description of the site being bookmarked, and can add tags for easier search access. They can also add the bookmark to their personal bookmark lists and share it with one of the groups to which they belong. The Chrome Extension Bookmark Tool is now an integral part of my web reading because it makes so easy to bookmark resources. 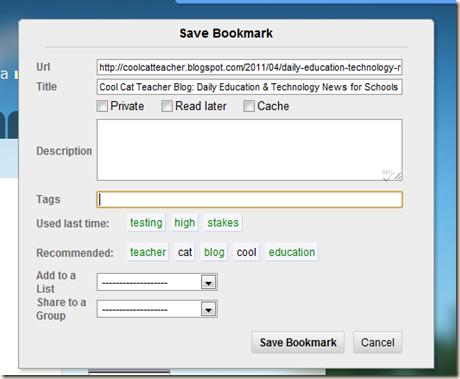 Chrome Diigo Extension Bookmark Input Box
Sticky Note Tool
The Sticky Note Tool allows users to attach digital sticky notes to portions of text in an online article. I use this feature to capture my thoughts about portions of text as I read, or just to attach a reminder about an idea while reading the text. These annotations are also made visible from the user’s Diigo account. 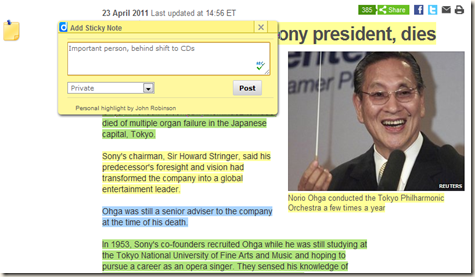 Chrome Diigo Extension Share Tool Interface
The Chrome Diigo Extension is a must-have collection of tools for any one who reads and gathers a great deal of content from the web. It’s four main tools enhances a user’s ability to gather information from web sites, bookmark those sites, add annotations to those sites, then share them with others through social media and email.
Posted by John Robinson Ed.D at 5:05 PM No comments:

If you go into any elementary, middle, or high school this time of year, you are likely to hear shouting like “Ace that Test” or “Let’s rock that test!” emanating from the Gymnasium. For once though, the shouting is not part of a pep rally to try to pump up an athletic team for an impending contest. It is a pep rally to get students pumped up to take state standardized tests.
After a simple Google Search on term “Test Pep Rallies,” I found 131 current articles describing recent events held by public schools across the country that would be described as “Test Pep Rallies.” For some schools, these rallies are combined with various kinds of incentives and rewards, but for now, I want to focus entirely on Test Pep Rallies. Here are some examples. In Ft. Leavenworth, Kansas, an elementary school held a Test Pep Rally in order to motivate students to take the second phase of state testing. Students cheered as teachers rode around on scooters and walked on balance beams. The sole purpose of this event was to motivate students to do well on the upcoming state test. Then there was the big test pep rally held in Fort Wayne, Indiana by a middle school. In order to further motivate students “to do better on tests” the principal told students that he would shave his head and throw a big party for them if they scored well on their standardized test. A similar event is held in Derry, New Hampshire where students are being motivated to do well on their New England Common Assessment. The principal in this case throws in a big smooch with a pig to get students motivated.

All over the country, administrators and teachers are holding “Test Pep Events” obviously with the hope that these events will someone have a positive effect on student achievement scores. But just what do administrators and teachers hope to accomplish with these test pep rallies?
In all the news articles I reviewed that described these “Test Pep Rallies” there were five main reasons given for holding these events:
While some of these reasons are obviously similar and perhaps indistinguishable, they all indicate the reason for the test pep event is somehow affect student performance on a state test. What is really curious about these practices though is that no where is there mention of how administrators and teachers are going measure how their pep rally event actually affected student performance. A search of the Internet led me to only one study that focused on Test Pep Rallies, and it was a study entitled “Pizza Parties, Pep Rallies, and Free Parking: How Common Are These Types of Testing-Related Incentives/Activities in Iowa Schools?” The authors of this study, Joann Moore and Kris Waltman did not study the effectiveness of these events; they only wanted to see how prevalent “Test Pep Events” were in the state of Iowa. They ultimately found that the practice of incentives and activities to boost test scores was quite common.

There is clearly a lack of research to support the practice of having test pep rallies even though I was able to find news articles describing such events as far back as the early 1980s. This lack of research concerning the effects of such practices leaves me with quite a few questions about their use. For example, do they actually have positive effects on the things they’re supposed to affect, like self-esteem, self-confidence, student test-taking stress, or the student’s achievement? When looking for research on effectiveness there is a deafening silence except for anecdotal accounts. If the practice of holding test pep rallies extends as far back as the early 1980s, you would think someone would have investigated the issue.
Of a bigger concern to me is what are some of questions I have about the possible negative effects of holding Test Pep Rallies. Those questions include:
I have no doubts that administrators and teachers who hold “Test Pep Rallies” really mean well, and want to equip their students with everything they can to do well in all circumstances, including standardized tests. In some ways, I think this practice is one of many practices where schools are trying to adapt to politics that place testing on an undeserved pedestal. Yet, it is important that school leaders not fall into the “do-whatever’s-necessary-to raise test-scores” trap. I would argue that kind of approach has a whole set of dangers about which administrators need to be cautious. Those dangers might include:
Obviously, there are a number of administrators and teachers who believe Test Pep Rallies do affect student performance. Why else have then been a part of school culture since 1983.  Yet, with wide spread practice of these events, you would think there would be lots of evidence of their effectiveness. Sadly, there isn’t. The question for me is, “Do we really want to give imperfect tests that kind of weight in our students’ lives?” The answer to that is not a question of effectiveness. For me it’s a question of ethics.

In response to those politicians in Florida and elsewhere who have pushed their merit pay bills through in the face of research that says it won’t work, and also in the face of many experienced educators who tell them the same, I post Daniel Pink’s TED video “The Surprising Science of Motivation.” I suspect it is just as Pink says:


“What worries me as we stand here in the rubble of the economic collapse is that too many organizations are making their decisions, their policies about talent and people based on assumptions that are outdated, unexamined, and rooted in folklore more than science.”

The idea of merit pay and pay for performance will not work. It will not improve education, and in the end, we can only hope it does not cause major damage to public education. Perhaps though, that is the ultimate goal any way. With the public education system in shambles due to bad education policy, there is no option but privatize. Then again, maybe this whole push for merit pay is indicative of who and what we truly idolize in this country:  we think the answer to all our problems lie in free markets and business. We forget that our current economic mess was caused by that which we idolize.