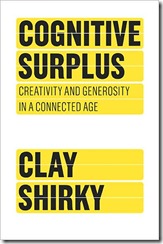 I have started this book review several times, and each time I erased it and started over. Clay Shirky’s latest tome about the Internet world and how it is impacting us is one of those books that does not lend itself to an easy description.

Cognitive Surplus is a complicated book on a complicated topic. It does not read with the ease of his last book Here Comes Everybody but it does provide the reader with the same level of food for thought. In this book, Shirky takes his readers through a close examination of a phenomenon he calls the cognitive surplus. This cognitive surplus is basically defined as “the aggregate of the world’s free time that is now made available due to the hyper connectivity of our world today.” With the advent of the Internet generally, and social media specifically, massive numbers of world citizens can pool their free time and intellects to create things that never before existed. Some examples of these creations in Shirky’s book are Wikipedia, which has grown to become one of the most accessed and referred to sites on the World Wide Web. He also provides the example of Ushahidi, which is an open source platform for gathering data via SMS, email or web. Ushahidi then provides that information for the public in graphical form. Below is an example of an Oil Spill Crisis Map created by Ushahidi to track the oil spill. 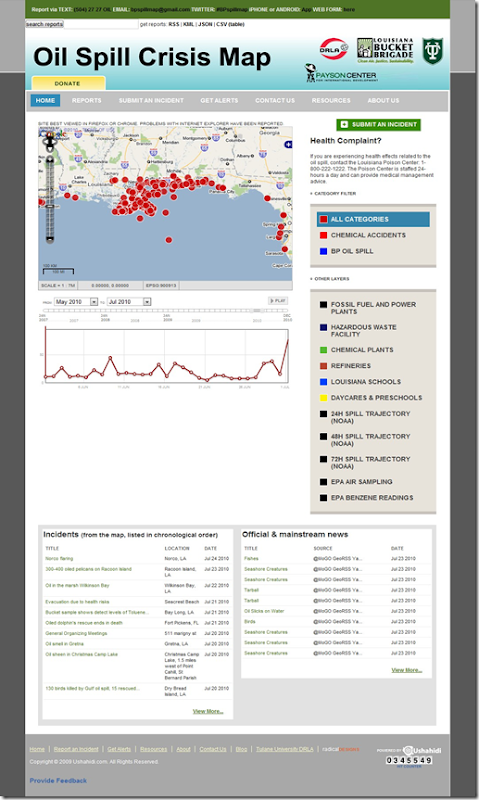 According to Shirky the combination of the free time, connectivity through social media, and a willingness to donate expertise have made platforms like Ushahidi possible. As in the Oil Spill Map above, individuals volunteer to report data that updates the map. The Ushahidi platform allows for reporting of aggregate information to the public. It is the cognitive surplus that makes projects like this possible. Shirky adequately captures the possibilities of this phenomenon when he says:

“The technology will continue to improve, and the population will continue to grow, but the change in direction of more participation has already happened. What matters most now is our imaginations. The opportunity before us, individually and collectively, is enormous; what we do with it will be determined largely by how well we are able to imagine and reward public creativity, participation, and sharing.”

According to Shirky, the possibilities of “deploying the cognitive surplus” can make a lot of good happen.

Here’s a video where Shirky attempts to explain how cognitive surplus will change the world.

This is a probably a book to engage individuals in the possibilities that connectivity in general and social media in particular bring to our society. An engaging and thoughtful read throughout. It is a book that can’t be read quickly.