ReadKit: An Inexpensive RSS Feed Reader for Your Mac

Since purchasing a MacBook Pro last weekend, I’ve been exploring RSS Feed Reader programs. Of course there’s the web-based stand-by programs such as Feedly or NewsBlur which I’ve written about before. But somehow, since the demise of Google Reader, I’ve been using either one of these, and I haven’t been entirely pleased with the experience of these two reader options. Both seemed to be plagued by bugs and misfires, at least in my experience, so while using Windows, I used them because there just didn’t seem to be a great deal of options.
Since becoming a Mac user, I have been trying some RSS feed readers, and in ReadKit, I think I’ve found a solid reader that has a clear interface as well as the ability to share articles directly from the reader to a number of other web services. The program allows users to share to the usual social media outlets such as Twitter or Facebook, as well as sharing to other collection apps such as Pocket or Instapaper. Users can also customize the interface to their own needs like most other Feed readers, and they can also use their usually RSS feed services such as Feedly, Fever, NewsBlur, Feed Wrangler and Feed and Feedbin. While most other Readers provide all of these features, for the most part, ReadKit has proven to reliable and less buggy than other readers I’ve tried, and it has a well-laid out interface with easy to learn features. Currently, ReadKit is on sale for $4.99 in the App Store. It is an excellent Feed Reader for Mac Users. 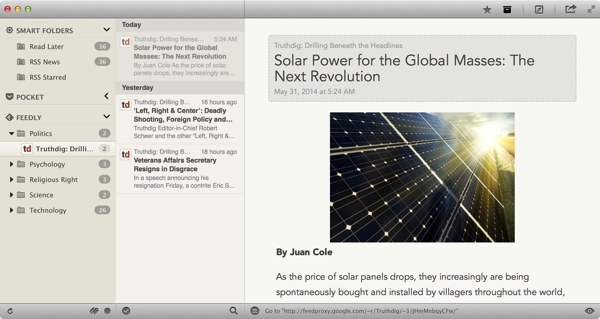