“Today, there is more religious activity in American public schools than there has been for the past 100 years.” Katherine Stewart, The Good News Club: The Christian Right’s Stealth Assault on America’s Children

When writer Katherine Steward discovered that a program called “Good News Club” was announced as an after-school activity at her daughter’s public school, she decided to investigate further. The result was basically her book The Good News Club: The Christian Right’s Stealth Assault on America’s Children. What she discovered was that the after school club was actually more than just a club that met after school; it was an attempt by an evangelical Christian organization to proselytize in public schools.
According to Stewart, the Good News Clubs advertizes  themselves as “Bible study” clubs that are only focused on those students whose parents give permission for their children to participate. But in practice, according to Stewart, those who run these clubs use tactics to try to coerce and cajole  other children to participate, even if those children’s families are of other religious persuasions. Stewart also points out that these clubs are more about instilling a fundamentalist religious doctrine in kids who participate than trying to simply study the Bible.

In her book, Stewart traces the Good News Clubs all the way back to an organization called Child Evangelism Fellowship, which is a global organization who does nothing to mask its intentions. Its intentions are clear if you look at their web site. “Child Evangelism Fellowship is a Bible-centered organization composed of born-again believers whose purpose is to evangelize boys and girls with the gospel of the Lord Jesus Christ and to establish (disciple) them in the word of God in a local church for Christian living.” Through their Good News Clubs their goals are to teach and indoctrinate children in a fundamentalist Christian worldview and make sure children attend Christian churches who subscribe to that fundamentalist world-view.

Throughout her book, Stewart takes readers through the various tactics that those who lead these Good News Clubs utilize to indoctrinate and lure children to this fundamentalist worldview. She actually attends conferences and training to get a complete view about what these clubs are really about. In the end, her verdict is that these clubs are more about trying to proselytize in public schools and undermine public education than offering after school options to parents.

Perhaps someone who buys into the fundamentalist Christian perspective would find Stewart’s book offensive. After all, if you believe your worldview is the one all people should have, then whatever tactics used to disseminate that view to others is acceptable, even directed toward little children. But Stewart’s book should provide enough reason to pause, for school leaders, before allowing these kinds of clubs to move into school settings. We as school leaders in the United States also serve a broader public whose beliefs do not always fall in line with a fundamentalist Christian worldview. Our students represent many faiths, and, while clubs like the Good News Club might serve some of our students, we must not forget that there is diversity in our schools. In this sense, we become the guardians of tolerance. Stewart’s book is an excellent read in that sense. School leaders facing a decision on whether to allow Good News Clubs in their schools would do well to read this book first. 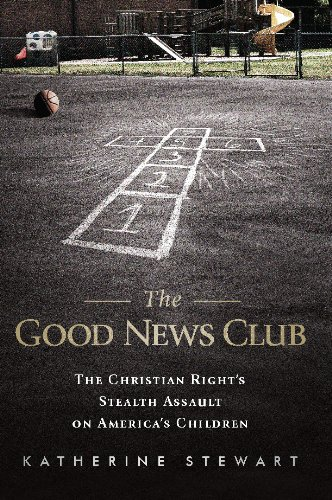