Knowing When Not to Say Anything: 4 Times Silence Is Better Than Words

"While embracing the value of straight talk, school personnel also need to realize often there is one communication tool that is even more powerful and effective: no talk at all," writes Robert D. Ramsey in his book How to Say the Right Thing Every Time: Communicating Well with Students, Staff, Parents, and the Public. Because we are all teachers, we always seem to fall into the trap of thinking that we are obligated to make a point, teach a lesson, or "impart 'wisdom." The problem is, as Ramsey clearly points out, such thinking ignores that communication is 2-way. Sometimes, "silence does speak louder than words" and knowing when to just be silent is a leadership and teaching skill like any other.

But when should we resist this temptation to speak with our words of wisdom? The art of "not speaking" is an important part of communicating. Ramsey offers us some advice on when not saying anything is better than speaking.
There is truly power in silence. While the teacher in us feels like we should always be ready to impart wisdom, the truth is, the best wisdom imparted is sometimes done so by not saying anything.

NOTE: Robert D. Ramsey's book How to Say the Right Thing Every Time: Communicating Well with Students, Staff, Parents, and the Public is full of advice and lists of making the most of communication with everyone. It is an excellent addition to your administrator's library. 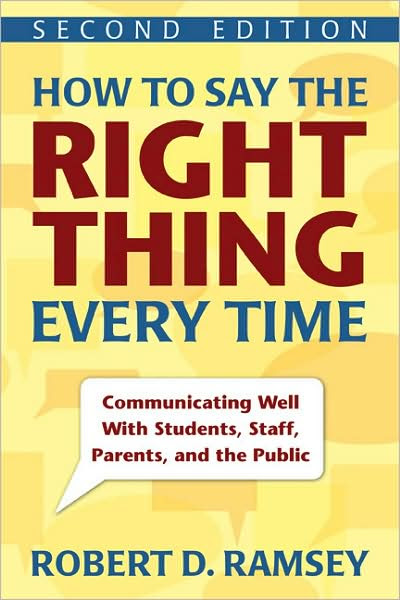 Posted with Blogsy
Posted by John Robinson Ed.D at 8:14 AM