Is Education Your Job, Your Career, or Your Calling? 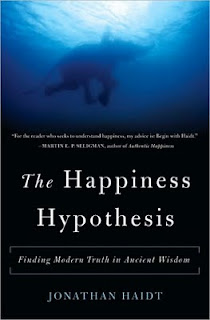 Those who approach their word as a job, "do it for the money." They are the "clock-watchers" who eagerly look for "quitting time" and daydream about what their weekend is going to be like. Most of these individuals seek greater fulfillment and engagement outside of their work.

Those who approach their work largely as a career, have the larger goals of advancement, promotion, and prestige in mind. These individuals according to Haidt, are energized by the pursuit of these goals. Sometimes, these individuals would be likely to take work home and do it themselves to make sure it's done properly all in the name of advancement.

Finally, those who approach their work as a calling, find their work in intrinsically rewarding. These individuals are not engaging in the work to achieve something else. They do the work because they are engaging in something that contributes to the greater good (This sounds a great deal like Daniel Pink in Drive.) Pink talks about the importance of feeling a part of something larger than yourself when engaging in work. Perhaps those who see work as a calling definitely see their work as much more important than those who see it as a "way to make money" or as a "way to get promotions or prestige."

The truth is probably not that clear. Most individuals probably engage in their work with just a bit of all three of these approaches, but we certainly would like to think that our work as educators rises to the level of a "calling." Yet, we still have current policymakers and education reformers who believe that the promise of money,  of a promotion, and of prestige is all that is needed to improve our schools. In their efforts to "reform" the system, they need to beware of destroying the nobleness of teaching by forgetting that teaching is also a calling. Sure, teachers want to be compensated well for what they do, but it is true ignorance to think that pay is all that matters. For me, education was and remains a calling, and that is non-negotiable. I became a teacher because being a teacher is engaging in the most important work there is. Teaching is by definition a work that engages in something that contributes to the great good of all. Perhaps there is truth our policymakers can learn from Jonathan Haidt's book The Happiness Hypothesis
Posted by John Robinson Ed.D at 11:05 PM