Building a Better Teacher Through VAMs? Not So Fast According to Mark Paige's Book

As a part of my research explorations, I stumbled across a relatively new book published in 2016 about the problems with using value-added measures in teacher evaluations. This book entitled Building a Better Teacher: Understanding Value-Added Models in the Law of Teacher Evaluation is a short and concise read that any administrator who currently encounters the use of value-added data in teacher evaluations should read.

Paige's argument is rather straightforward. Value-added models have statistical flaws and are highly problematic, and should not be used to make high-stakes decisions about educators. Scholars across the board have made clear that are problems with VAMs, enough problems that they should only be used in research and to cautiously draw conclusions about teaching. Later, Paige also provides advice to opponents to using value-added models in teacher education as well. Attempting to challenge the use of value-added models in teacher evaluations through the federal courts may be fruitless. According to Paige:


"At least at the federal level, courts will tolerate an unfair law, so long as it may be constitutional." p. 24

In other words, our courts will allow the use of VAMs in teacher evaluations, even if used unfairly. Instead, Paige encourages action on the legislative side. Educator opponents of VAMs should inform legislators of the many issues with the statistical measures and push for laws that restrict their use. In states with teacher unions, he encourages teachers to use the collective bargaining process to ensure that VAMs are not used unwisely.

Throughout Paige's short read, there are reviews of legal cases that have developed around the use of VAMs to determine teacher effectiveness and lots of information about the negative consequences of this practice.

Here are some key points from chapter 1 of Mark Paige's book Building a Better Teacher: Understanding Value-Added Models in the Law of Teacher Evaluation.


Throughout his book, Paige offers numerous key points that should allow one to pause and interrogate the practice of using VAMs to determine teacher effectiveness. 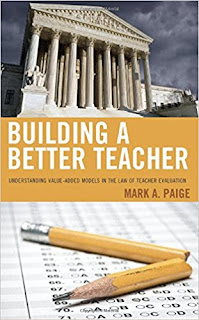