Should Children Play Football? Is It Safe? No, It Is Not

"Wherever I go," writes Dr. Bennet Olmalu in his new book, Truth Doesn't Have a Side, "people ask me one question more than any other: 'Dr. Omalu, is it safe for my child to play football?' The answer is simple. 'No it is not."

With those words, the physician who discovered that NFL players suffer and have died from chronic traumatic encephalopathy, makes it clear that no matter what coaches may say. No matter what helmet manufacturers or football safety equipment designers say, playing football is not safe. Olmalu makes it clear that the human head is not designed to absorb the blows that often occur during the game of football. He write that animals like woodpeckers have built-in shock absorbers to protect their brains from impact forces, but humans do not.

In addition to not having brains capable of absorbing the impact of hits, he also points out that the football helmet is not designed to help. It protects the skins from cuts and perhaps the fracturing of the skull, but it does nothing to help with the jarring of the brain inside the skull. Add the fact that the brain doesn't have the ability to repair itself like other bodily organs, there is a problem with any activity that ,damages the brain.

No one asked me if I would again play football as I did in high school many years ago. Nor did anyone ask me if I could once again coach high school or middle school football as I once did. I'll answer anyway: "No, to both questions."

If I could replay my life again, I would not play football when I was high school, because I would have avoided that knee injury that ended my play then and has prevented me from being as active as an adult as I've wanted to. It has resulted in two surgeries and years of pain as well.

As for the coaching? I'm fairly sure I could not in good conscience, with all the increasing scientific evidence, enthusiastically encourage our youth to strap up and use their bodies as missiles either. As Dr. Omalu points out so clearly, humans aren't made for that. Of course, one could argue that "Humans weren't made for flying either." True...that's why I don't do that often ether.

The truth is, and I think Dr. Omalu makes this point very well: Adults choosing to play football with all its risks is one thing. They are mature enough to weigh the risks and decide for themselves. Children? Well, there's a reason why they're prevented to making decisions about risky behavior. As a parent, as a teacher, as a coach, and as a principal, we have children in our families and in our schools playing football. Let's just make sure these little ones teenagers aren't playing and taking the risks for us so that we can enjoy the "glory" of football. Personally, that's one sacrifice I can't make. 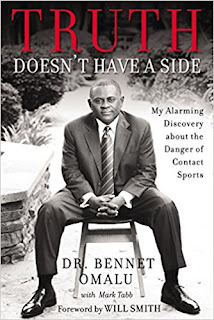