Oreskes and Conway’s book Merchants of Doubt is proving to be a fascinating read. I purchased it the other day after seeing a brief description of it on Barnes and Noble’s web site. What caught my eye was the subtitle: “How a handful of scientists obscured the truth on issues from tobacco smoke to global warming.” I am in the middle of one of my reading jags. Several months ago I became fascinated with how think tanks and other policy oriented organizations are filling the media with “supposed” scientific evidence to support their pet biases. For example, the Fordham Institute has plastered web sites with study after study that they say “proves once and for all that vouchers and school choice work.” Members of this institute who are supposed to be researchers don’t exactly publish phony studies, but they do twist facts and misrepresent results to push their own narrow agenda.

Merchants of Doubt focuses on how well-known scientists have aligned themselves with industry and institutes with narrowly-focused ideological agendas to attack scientific findings that are contrary to their beliefs. This book begins by looking at the misinformation campaign and downright deception of the tobacco industry to mislead the public on the dangers of tobacco. Their goal was to create doubt in the minds of Americans regarding tobacco use, and they succeeded for quite some time, until lawsuits and the truth became known about their underhanded tactics. At this point, I am now reading the chapter about those scientists, tied to political agendas, purposely misled the public about the strength of the Soviet Union’s military in order to push their agenda of attacking detente and peaceful limits on nuclear weapons. (Sound familiar?)

What fascinates me about this book is how education-issue think tanks and even university researchers paid for by foundations with an agenda are basically doing the same thing with school choice research and charter research. These individuals are deliberately obscuring the truth about the state of education in the United States and the effectiveness of their narrow agenda items in order to derail public education. Organizations like the Friedman Foundation, Fordham Institute, and Heritage Foundation are not interested in facts and research unless it supports their narrow agendas. Their comments and “research findings” make their way into the mainstream media for all to see. What is really sad, many times the media does not question their findings. That is the same thing Oreskes and Conway say happened with the research on the dangers of tobacco. The media often printed their “research” or interpretations of research that basically said, “there is no proof that cigarettes cause cancer.”

These same forces are at work today. These organizations like the Fordham Institute and Freidman Foundation continue to point to the worst that is in public schools to create doubt about the whole public education system. They then push their own narrow agenda---vouchers and school choice. First of all, obscure the truth, then secondly, push their agenda. Oreskes and Conway call it the “tobacco strategy.” It works very well when current reality does not match your agenda. Tobacco strategy means to obscure the truth to the point that there is a great deal of doubt, even about what is scientific truth.

For interest sake, I have included a video of Oreskes describing her book. It’s a great read so far. 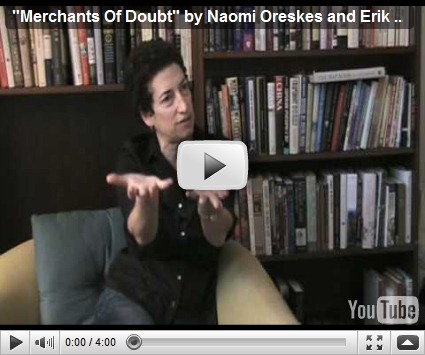