'Fear and Learning in America': Stirring Up the Hornets' Nest in the War on Education

Since the dawn of No Child Left Behind all the way through the Obama administration’s signature Race to the Top program, finding school administrators willing to criticize these federal programs and what they've done to public education is often difficult. As Kuhn points out, smart administrators “don’t poke hornets’ nests with sticks,” because it isn’t the smartest thing to do politically, but that is exactly what Kuhn does in his book, Fear and Learning in America: Bad Data, Good Teachers, and the Attack on Public Education. He takes on, with wit, energy, passion, and solid logic all the current education reforms that seem to be directed toward tearing down the teaching profession and public education brick by brick.

According to Kuhn, this anti-public education agenda began all the way back when the media, policymakers, politicians, and even educators uncritically accepted the problems with public education outlined in the Reagan-era education report, A Nation at Risk. This report set our nation on its current path of education deform because no one critically questioned its broad negative declarations about public education in the United States. As pointed out in Kuhn's book, this report "spurred a rising tide of negative reports" that were often accepted entirely at face value and uncritically, often, even by the educational establishment.

Throughout Fear and Learning in America Kuhn repeatedly takes on these education reform measures and those pushing them. He takes on the obsession with standardized testing in this country and the use of what he calls "standardized junk science" or the use of value-added measures to evaluate teachers. Kuhn also points out that "At some point education reformers stopped asking teachers to be accountable for quality teaching and started asking them to be accountable for miracles" and that the current reform movement powered by "policymakers, journalists, and think tank wonks embraced the pursuit of superteachers as a way to fix schools, and, ipso facto, society."  This "pursuit of miracales" as Kuhn calls it, has left teachers with three choices all bad: "perform miracles, fail, or cheat."

John Kuhn's book Fear and Learning in America is both entertaining and informative. He disperses anecdotes throughout the book that communicate the often unforgotten and human side to what this current reform agenda has done to our schools. He describes how all these measures have ultimately placed public education in America in "The Educational Dark Ages" where there are those well-meaning reformers who are pushing change out of noble intentions, but there are also those pushing these reforms who have more sinister and self-serving agendas. He goes on to point out that current educational reformers have conveniently discarded poverty and all other achievement-influencing variables because they have been deemed either off limits or too difficult to tackle.

Unlike some of the current books examining the anti-public education sentiments in the United States, Kuhn does not just passionately detail what's wrong with current education reform; he offers at the end of the book his own ideas on what can be done to improve education in America for all students. These all stand in contrast to the current educational reform agendas being pushed by state and federal policymakers and politicians.

I have read several books that examine this American phenomenon of attacking public schools, but Kuhn's book, Fear and Learning in America: Bad Data, Good Teachers, and the Attack on Public Education is one of the best yet! It's readable, entertaining, and passionate style make it both a page turner and an inspiration for any educator interested in the current state of public education. 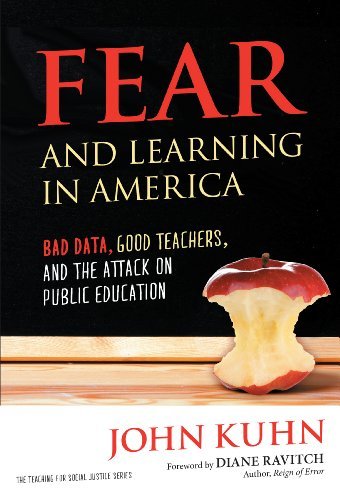