A 21st century skill that all students need badly is the ability to spot misinformation. As educators, we desperately need to do as Loren Collins states in her book, Bullspotting: Finding Facts in the Age of Misinformation. We need to "arm our students with baloney-detecting tools to prevent false and unsupported beliefs so that such beliefs can be better contained." In other words, 21st century educators need to equip our students with "baloney-detection" skills. 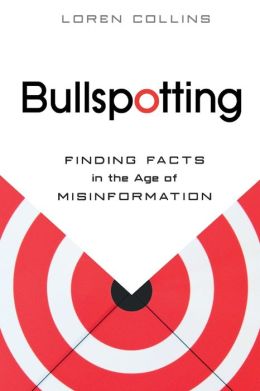 What do these baloney-detection skills look like? Here's a starter list based on those described by Collins.

1. Be skeptical when people toss around the phrase "it's just common sense." Many individuals use this phrase as if it were sacred and unquestionable. The truth is, many things once accepted as common sense turned out to be flat wrong. Just ask those who said the world was flat. Using this phrase should never protect information from a skeptical examination. We need to teach students to be skeptical, always, when someone employs this phrase in an argument.

2. Be able to employ the scientific method to test information. In an age of misinformation, our students must have the ability to test hypotheses and conclusions they encounter. They need to be able to pose a question, research that question, construct a hypothesis, test that hypothesis, analyze the results, and finally draw conclusions. Their final conclusions should then always be subject to further validation. All of our students need to be able to employ these steps to test information because of the amount of misinformation posing as science all around them in cyberspace.

3. Be able to identify ideological and agenda-driven websites and information. In the age of misinformation, the ease with which individuals can publish information online has created a whole new world where anyone, no matter what their beef, can publish. It is vital that our students maintain a level of skepticism and explore the ideologies and agendas those publishing web sites might have. All information needs to be examined with a skeptical eye toward what that person's beef might be.

4. Be aware of their own confirmation bias and the role it has in being misinformed. We know if we are heavily biased toward confirming our own beliefs, we hinder the ability to dispel ourselves of beliefs that might be false. We, and our students, need to be aware of our tendencies to seek out information that confirms what we believe rather than looking at all the data. With these principles in mind, our students need to be able to detect their own confirmation biases and those of others as they deal with the information torrent.

5. Be aware of those who use anomalies to make their arguments. Individuals who use this tactic, gather up a collection of anomalies and attempt to use the weight of those to argue against a consensus view. This tactic is being heavily used by those spreading misinformation about climate change, and it was also used by those who argued against the ill-effects of smoking. Our students need to be able to recognize when someone is engaged in anomaly hunting as a misinformation tactic and recognize it as a misinformation tactic.

6. Be ware of the use of the logical fallacy of "proof by verbosity." Just because an argument is lengthy and complex does not necessarily mean it is true. Students need to be able to recognize when someone is engaged in this logical fallacy.

7. Be able to notice when someone engages in denialism. Those who engage in this tactic, just deny or reject a widely accepted truth, and they usually offer no solid alternative instead. Those who engage in denialism aren't really interested in determining the truth; they are simply interested in rejecting one. Our students need to recognize denialism as a tactic that tries to deflect away from what has been accepted by consensus.

8. Notice when someone employs fake experts. This is commonly used on the web. Those arguing against climate change or for intelligent design curriculum heavily use this one. In the climate change debate, often those making the arguments are not even qualified as climate scientists. Likewise, organizations like the Discovery Institute employ non-biologists in their arguments against evolutionary theory. Students need the skill of checking the credentials and credibility of the information sources they encounter.


In the 21st century, we as educators have a moral imperative to make sure our students are equipped with proper "baloney-detection tools" so that they can avoid being mislead and misguided in a flood of information.

Posted with Blogsy
Posted by John Robinson Ed.D at 8:17 PM