With the impending demise of Google Reader, I have been in search for an RSS Reader replacement. As soon as the announcement was made, I was one of "500,000 Users Who Turned to Feedly as an Alternative." I also tried other alternatives suggested on Twitter, such as Newsblur and some desktop software readers such as Feedreader. In the end, I think Feedly is the best choice as a replacement to Google Reader. 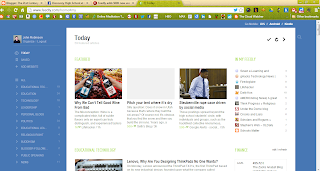 1. Simple web interface. Other alternatives, such as Newsblur and Feedreader were much more compluicated. I liked Google Reader because of it's simplicity. Feedly's layout of feed subscriptions is easy and accessible, making it a good choice.

2. Users can scan through RSS feeds rather quickly, and marking them read is as easy as clicking on a link. For me this was an important part of Google Reader. I consume RSS news quickly, not always reading entire articles. Feedly's interface does facilitate that kind of reading.

3. Page layout options are available. Users can customize, to some degree, their RSS reading experience in Feedly, in many ways, much more than they could in Google Reader.

4. Feedly has an iPad app. This gives users tablet and smartphone access to their RSS reading. The app is much easier to use than the the web app, and sharing your reading through social media is also an option, another important feature of my RSS reading experience.

5.Users can choose color themes for their web Feedly interface. I prefer the darker colors on my laptop, so this is an option I like even more, since it was not available in Google Reader. 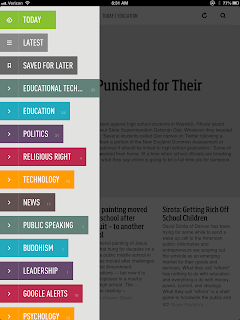 
With the demise of Google Reader, Feedly makes sense as an RSS Reader replacement app.
Posted by John Robinson Ed.D at 9:12 AM